Home » All » The Binding by Bridget Collins 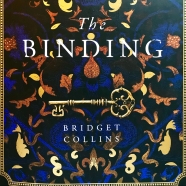 The Binding by Bridget Collins

Posted by Ms K on April 1, 2019 in All, Book Club Fodder, Grab it Now, Holiday Reads, The Perfect Gift | Leave a comment

This is the hour The Binding released me from its clutches and let me sleep.   Now I know this may not be a biggie for many of you, but for this pumpkin, 10.30pm is a late night.

I was held captive, shaken and stirred from first line to last.

For lovers of Tobsha Learner (The Witch of Cologne), this one is definitely for you.

Emmett Farmer discovers he is a Binder after receiving a letter summoning him to begin work as an apprentice.  Kicking, he goes to learn from the bookbinder Seredith, an old woman whose work is shrouded in superstition and witchcraft.

You see, bookbinding is not about binding a book as we know it.  In the time this story is set, books were for the elite, they were full of terror and held deep mystery and magic.

They didn’t tell a fictional story.  They held a person’s real memories, extracted by a binder who, when they touched hands with the ‘client’ became the carrier of the memories, a channel to  frantically write them down, binding and trapping them, locking them away.

People came to have their most horrible, most brutal and sad memories taken away.  A binding could erase your grief, make you forget your pain and hide a secret forever.

Rather tempting, I imagine.

Afterwards the person was completely released – an amnesia of sorts –  unless, they read their book or it was destroyed and then the haunting memories were restored.

Emmet stumbles through the early weeks of his apprenticeship weakened by a recent bout of serious illness that never quite receives an explanation.  Something terrible had happened to him.  His tutoring is laborious and he longs to enter Seredith’s  vault where the books are locked away.

When he finally has the keys, he is both awe-stuck and protective of the bounty – until he discovers a book with his name on it.

Told in three chapters, the discovery of Emmett’s book marks the end of the first.

The second chronicles the harrowing story removed  from him during his binding.  It’s beautiful, but forbidden and therefore destructive.

The last chapter sees Emmett’s memories restored after he burns his book. Broken by what he remembers, he begins the fight to right the past and find the love of his life again.

This is a book of magical dimensions but mostly, it is a sweeping love story between two characters bound together in life and in the pages of their books.  It is enchanting, evocative and sensual but like a heady perfume the top notes are dark, mystical and complex.

My advice is take a seat, open it up and breathe it all in.

But that is just my two cents worth.