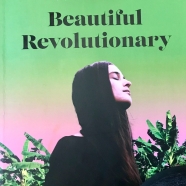 If you’ve ever wondered how the saying ‘drinking the Kool-Aid‘ came about, well good news Readheads, this book answers it for you.

The not-so-good news is you really won’t like the explanation.

In Beautiful Revolutionary, Laura Elizabeth Woollett has penned a masterful and intriguing re-telling of the 1978 Jonestown Massacre which saw 918 men, women and children follow a cult leader to Guyana, drink the Kool-Aid (literally) and die.

Let’s just take a moment and look at the figure again.

It was the second largest mass killing in the history of the United States of America (the first is September 11) and while this may not be a topic on your top 10 want-to-read list, I want you to have a go at it. It is worth the discomfort.

Woollett has deftly managed to write a rich and sweeping book that chronicles the manipulations, the misogyny and the corruptive pull of cult life.  And in these same pages, she  beautifully and gently infuses all of the followers with a humanity and a grace that you can almost understand how they end up there.  They take your heart.

Except the Reverend Jim Jones. This man I hated from the get-go.

Jones was the dynamic leader and celebrated human rights activist who started the cult  – or more kindly – the revolutionary church named Peoples Temple in the 1960s.  This smooth talker had all the superficial makings of a saint, the traits of a magician and he was celebrated broadly as a hero of the people.  People flocked to him.

He and his wife adopted an African-American child making them the first Caucasian family to do so in the state of Indiana and his mainly black congregation were welcomed and protected against epidemic racism. The Peoples Temple fed everyone who came, offered education to all who wanted it, provided housing and promoted a utopian vision of total equality.- a place without rich or poor and no racial divides.

Until the screaming starts that is.

Beautiful Revolutionary is told from different perspectives of the faithful  – never Jones himself (unless I blocked his voice out of my head which is possible).  A central figure is Evelyn Lynden, who joins the Temple with her pacifist husband Lenny in the late 60s. The world around them is chaotic and violent and war, racism and political assassinations leave Evelyn hollowed out and in need of a saviour.  She finds him in Jones and becomes one of his most loyal and important lieutenants.

Spoiler, she ditches her husband Lenny to do so of course (but Jones sleeps with both of them for good measure).

The story features an arc of other voices – each striving for goodness, worshipping the Reverend and following his dream to Jonestown Gayana.  It is here – where the Peoples Temple utopia had become more of a concentration camp – that a drug-induced and maniacal Jones reaches breaking point and takes his Messiah-self one lethal step further.

Believing in Revolutionary Suicide,  he and his faithful inner circle, seduce all of his followers with a glass of Grape Punch, only telling them afterwards it was laced with cyanide.  Those who would not drink it were injected forcibly and within hours, tragically, horrifically, sickeningly nearly 1,000 people lay dead.

This would not be an easy book to write.  It is a complex story which required an enormous amount of knowledge and back-story to make it authentic.   Through extensive research, Woollett successfully developed her characters and deeply explored the faithful’s thirst for love and inclusion, their lust for goodness and of course, what is a cult without sex, each other.  It is also what makes their ending so brutal, so lonely and so evil.

Knowing all of this,  Beautiful Revolutionary is not as tough a read as you may think (it is the skill of Woollett’s light and clever hand) but it is no picnic either, particularly when you hate Jones as much as I did.

But be brave,  brace yourselves and buy a copy.

But that is just my two cents worth.

← A Hologram for the King by Dave Eggers The Incendiaries by R.O.Kwon →