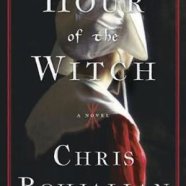 The Hour of the Witch by Chris Bohjalian

There are many ways to break a reading drought.  It could be a week of woolly weather, a break from work or a raging pandemic with government enforced lockdowns.  Or it could just be the timeless allure of a great book.

Like a hot bag of Uber Eats at the end of a long week, The Hour of the Witch was exactly what I ordered. Thank thy Lord.

So, let’s talk about it.

The Hour of the Witch is set in 1662 in Boston, Massachusetts and tells the story of 24-year-old Mary Deerfield who is seeking a divorce from her wealthy and powerful husband.  He is routinely violent and abusive towards her and she is clearly not safe in the marriage. However, the Court and community are much more preoccupied by the possibility that she is possessed by the Devil and should be stoned and hanged in the town square.  I’m simplifying things, but you get the idea.

The book is written in two parts. First, the civil divorce proceedings that Mary initiates and then, the criminal prosecution of her for witchcraft.  Don’t give up on the relatively slow pace of the first half because things definitely pick up later on.  I had no idea how it was all going to end…a bit of a thriller really.

Now everyone’ knows I am a sucker for historical fiction, but this book is more than that.  To me, it’s a look at domestic violence in a seventeenth century setting from a woman’s perspective. I really like the angle Bohjalian has taken to try to separate church law from civil law, good from evil and rumor from fact; in circumstances where all of those things are intertwined.

Don’t expect another burning at the stakes story a la Salem. You also don’t need to worry about too much historical detail and lacy language. Instead, you are going to find an easy read about a strong but powerless girl who is trying to exit an abusive marriage in order to save herself.  Yes, it is an all-American witch-hunt, but it was also the perfect drought breaker for me.

Can I finish with a little note about the drought? Ms K has been holding the Redhead fort for at least the last 2 years while I read but don’t review or don’t read at all. Ms K, you are the Thelma to my Louise and the pillow to my blanket. Thank you for not giving up on me.