Home » All » A Room Made of Leaves by Kate Grenville 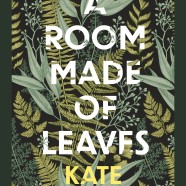 A Room Made of Leaves by Kate Grenville

Few authors get me to the bookshop faster than Kate Grenville.  After The Secret River and The Lieutenant (which every single Australian needs to read if they haven’t already), all other authors can take a ticket.

This time, Grenville shares the story of Elizabeth Macarthur, wife of British officer and renowned pastoralist of early colonial Sydney, John Macarthur, the man who half of Sydney is named after and whose unsmiling face used to grace the old paper $2 note.

With or without Kate Grenville, I am a sucker for an untold “woman behind the man story” and was genuinely interested to learn more about the role Elizabeth played in the first years of Australian settlement. My expectations were high.

If you read the Editor’s Note, Grenville says a box of Elizabeth Macarthur’s personal letters had been found and all she had done was edit and transcribe them into a novel.  I believed her.  Even when things got a little racier than you would expect from a young woman in 1780, I still believed her and read on. It wasn’t until I was about half-way through when I started to think (a) this can’t be for real and (b) when are we going to hear about what Elizabeth actually did?

It turns out that A Room Made of Leaves is a totally reimagined secret memoir that is believable (for the most part) because of Grenville’s extraordinary knowledge of the period and her wonderful writing.  From the plant life to the politics, the detail is astonishing and it’s an undeniable page turner.

Hats and bonnets off to Grenville for her masterful interlinking of actual historical events and people, but to me it wasn’t enough and didn’t live up to the lofty standards of The Secret River or even the Editor’s Note for that matter. Where Grenville’s Elizabeth was supposed to be a wilful woman of independent thought, spirit and tenacity, I found her to be florid, romantic and, frankly, annoying. To be honest, I was half expecting her to faint or contract consumption at any time and even the book’s title gives me flashbacks to the parts where I rolled my eyes the most. Harsh I know.

In short, I enjoyed the book but wasn’t really challenged by the truth versus fiction twist and didn’t feel that Grenville did as much as she could with the bare bones of Elizabeth’s story.  I couldn’t help but feel that she must have been way more interesting in real life.