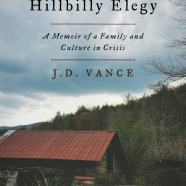 There’s not a single person I know that wouldn’t take something away from this book which probably explains why it’s a number one New York Times Bestseller.

Released in late 2016 and timed to perfection, this personal memoir of US businessman J D Vance offers insights into the disintegration of towns and communities in the rust-belt of America.

The author was born and raised in Middletown, Ohio. He is descended from a large hillbilly family in Kentucky, where his working class grandparents “Mamaw” and “Papaw” taught him the true meaning of family loyalty, love of god and country and how to use a gun. They were there for him when his father figures and addict mother were not and gave him enough support to finish school, serve in the Marines, graduate from Yale Law School and write this book.

Vance’s story tracks post war industrialism, with jobs and opportunity, to the present day where a growing percentage of white Americans are living in poverty under a cloud of drugs, alcohol and fear and have an intense and visceral mistrust of the political system that they believe let them down.

It is hardly surprising that so many people would link Vance’s story of a class and culture in crisis to the current political climate. As people around the world search for the root causes of the ballooning support of Donald Trump and his like, Vance’s articulate and heartfelt story is irresistible.

Even if you aren’t interested in political inferences or modern American history, I promise you’ll get as much enjoyment from the “poor kid made good” story of J D Vance and the voice he has given to the hillbilly communities of America.