Home » All » The Nest by Cynthia D’Aprix Sweeney 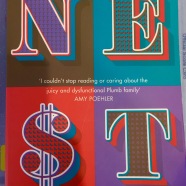 The Nest by Cynthia D’Aprix Sweeney

Siblings come with an innate sense of fairness. It starts with ice cream but extends to everything from who gets the most time with Grandma, help with homework, pocket money or lifts to school. Dammit in my household, I get in trouble for misallocating the length of my hugs. Now I’m no mathematician but surely sibling management has got to be one of the most primal mathematical instincts known to man.

You won’t find any solutions to this age old problem in The Nest but you will have a bit of a chuckle about the four New York based Plumb siblings who are counting down to the release of their family trust fund. The problem is that just months before the big day, one of them stuffs up and the money they’ve been banking on is gone. Mum does a runner, debts mount up, promises are broken and the gloves are off.

Primal I tell you. Primal.

Released in March and written by Cynthia D’Aprix Sweeney, The Nest has picked up some solid groundswell. Ok it helps to have great PR, a seven figure advance for your debut novel and Amy Poehler’s words of praise all over your cover. It also helps to have a great premise, a cracking start and crafty writing.

You will get lost amongst the dysfunctional siblings and their string of poor choices but enjoy the way their changed fortunes force new perspectives and priorities. The story is told with more than a dozen different voices and although you might think it would get messy; it breezes along seamlessly with a cool, calmness I really liked.

Promise me not to get hung up on the occasional cliches and don’t beat yourself up for enjoying this relatively shallow but clever read. The characters aren’t overly developed but I think Sweeney has done that deliberately (a) because there is too many of them and (b) it’s just not meant to be too serious.

More than just a rich behaving badly tale, the book explores the risks of counting chickens before they hatch and the dangers of having a predetermined fete. It also pulls in all those sibling instincts and attachments in a surprisingly affectionate way. It is not trying to be righteous or heavy and it if you take it as it comes, you will love it like I did.

Now I couldn’t help but notice that Lionel Shriver (We Need to Talk about Kevin) has just released a new book (The Mandibles) which also deals with a family inheritance lost. I’m just hoping they she and Sweeney aren’t distant relatives.

And that is my 2 cents worth.