Home » All » The Girl on the Train by Paula Hawkins 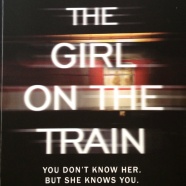 The Girl on the Train by Paula Hawkins

I learnt a new word courtesy of this book. Unputdownable. I didn’t make it up – someone else did – one of the book’s reviewers who clearly loved this book as much as I did.  To say I was like a rabid dog reading it, is an understatement. I couldn’t stop myself.  It’s simply unputdownable.

I don’t think I have chewed through a book with more vigor since Wild or Gone Girl.  This one, like Gone Girl, is a thriller too.  It grabs hold of you and you’re done for.  It’s a ripper.

Rachel rides the same commuter train every morning.  She says, ‘To everyone else in this carriage, I must look normal; I’m doing exactly what they do: commuting to work, making appointments, ticking things off lists.  Just goes to show.‘

Just goes to show alright that nothing is what it appears.  Not with Rachel, not in the lives of those people she spies on from her seat on the train, those same people she  obsesses about day in, day out. Until that is, Rachel sees something shocking from her seat involving a couple she has watched and studied for months.  It is a brief glimpse but it’s enough to alter them all and entangle Rachel in their lives, and those living near them.  None of them will ever be the same again.

The story is thick with intrigue from page one.  It is so deliciously tense and your heart is in your mouth for a good chunk of the book.  If I had one small negative, I think that the end was maybe a little hurried. Almost like a page or two was missing.  There was a leap, but because the story is so compelling and the outcome not what I thought, I forgive that I was sped up a little toward the end.

The Girl on The Train is an absolute cracker and reminds me why I love to read so much.  I was utterly absorbed, hanging on each word, desperate to return to the intrigue and turmoil, annoyed when life dragged me away from it.

Get it and read it as soon as you can because, well,  don’t you think we all need and deserve some unputdownable in our lives?

But that is just my 2 cents worth….